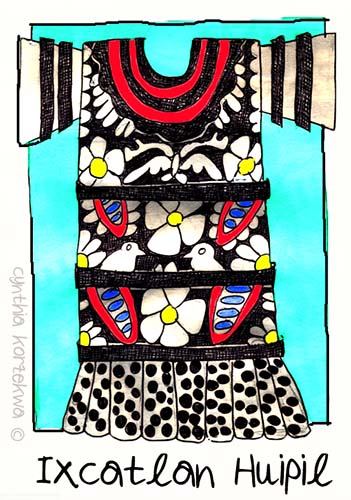 Frida frequently wore the dress typical of the Isthmus of Tehuantepec. Because  women of the area were extremely beautiful, sensual and  gutsy.

In 1922, José Vasconcelos became minister of public education.  He firmly believed that, instead of looking towards Europe, Mexican artists should look towards Tehuantepec and Juchitàn for inspiration. With Vasconcelos encouragement, Diego Rivera visited the area. The artist was overwhelmed by the beauty of the landscape.  And of the women. 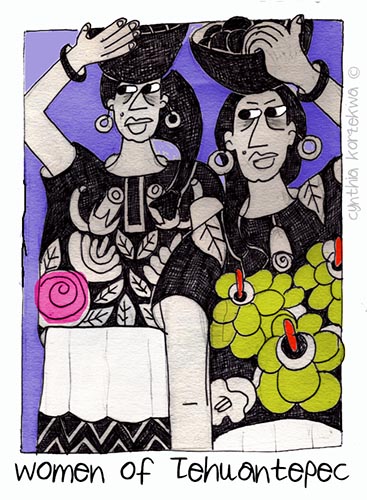 Because the women of Tehuantepec tranquilly bathed naked in the river, foreigners who came to visit mistakenly interpreted this to mean that the women were sexual libertines thus attracting more foreigners to the area.

With its Zapotec origins, the Isthmus of Tehuantepec is considered a matrifocal society mainly because it is the women who are in charge of the commercial activity. Men work in the fields whereas women sell in the market place.

Daily, women of the area wear full-length skirts called enaguas  along with their huipiles known as huipiles de cadenilla.  In Spanish, cadenilla means “chain” as the machine embroidered gold threads in geometric shapes hope to create the illusion of the gold chains the women like to wear. For special occasions, huipiles de fiesta are worn.  They generally are embellished with hand embroidered flowers.

The special huipiles are worn to velas, highly animated fiestas which begin as candlelight vigils honoring one of the areas various patron saints and end as night-long parties.

At velas, men drink beer while women dance together especially to “La Zandunga”, a Mexican waltz reflecting a mixture of musical origins (it could be a Zapotec interpretation of an Andalusian song). The song is about a Zapotec woman who cries after her mother’s death.

At velas women wear their huipiles with pride.  And only women wearing huipiles and enaguas dance. 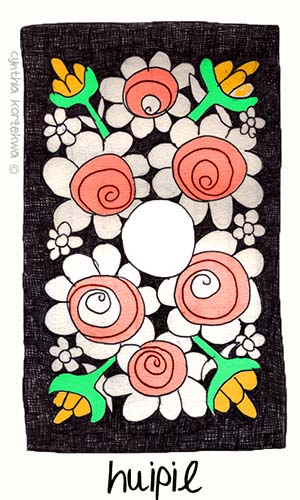 More than matrifocal,  the Tehuantepec society is a maternal society. And for this reason, women are a dominating force. Because it’s the woman, and not the man, who psychologically focuses on the well being of the child.  For men, working in the fields is a way of avoiding domestic problems.

It is also matrifocal in that girls are taught to be economically independent. In part because mothers know sons are more prone towards crime and drugs than are their daughters so they will be able to depend more on daughters than on sons. Well, save for gay sons who are considered a gift.  Because a Tehuantepec woman know she can always count on a gay son to be there in need.

Because they have an important role in society, the Tehuantepec women have a strong sense of self-assurance.

DeMott, Tom . Into the Hearts of the Amazons: In Search of a Modern Matriarchy. University of Wisconsin Press. Madison, WI. 2006.